I’ve lost count of the people who have told me that I would love Up The Creek, so this year I finally hit the road with my lilo. 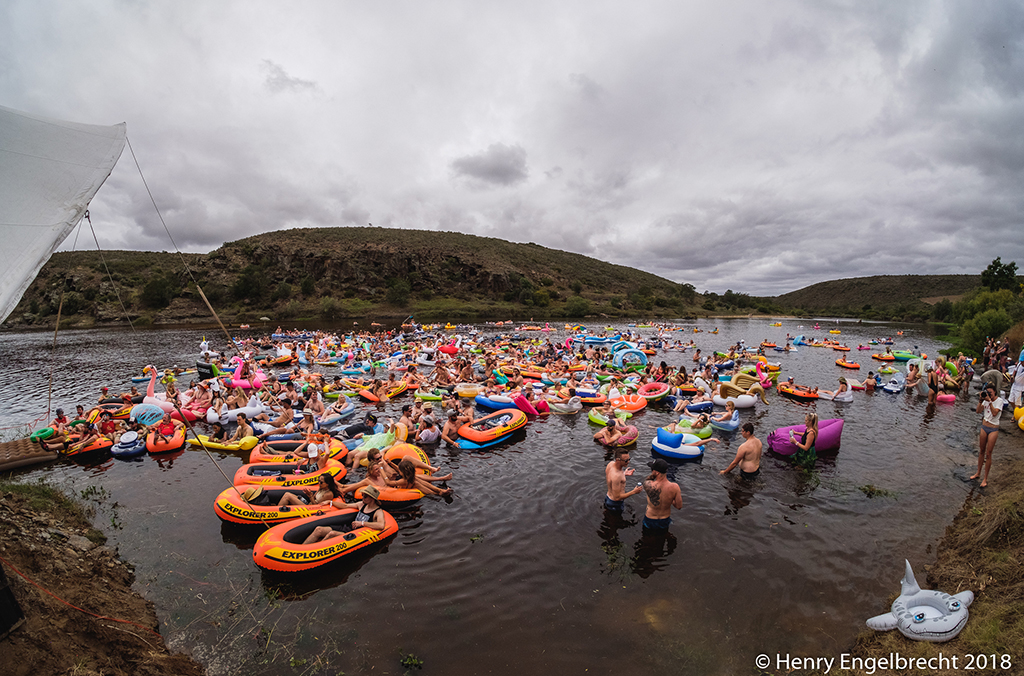 My wingman, the seriously talented and ridiculously hard-working photographer Henry Engelbrecht, drove us there after a red-eye flight on Friday morning. As the valleys unfolded we found ourselves in the middle of farmland with a secret ingredient: a gorgeous river. It was only knee-deep when we got there, but lilos (and festival-goers) don’t care.

Tent, mattress & bedding – check, check, check. I went off exploring the river stage, food stalls, bars and landscape. It’s such great venue and setting, everything is close together but never too crowded, and in the event of you needing to be alone for a little while, there’s plenty of space for that too. The organisers cap the event at 2500 tickets, and this number is just right.

Cashless Howler RFID armbands were a stroke of genius. I first saw these in 2016 at Panorama NYC, and have been singing their praises since. Being able to walk around without having to remember to look after a wallet or card is a liberating experience, and the process of cashing out took me less than 5 minutes (funds clear in 1-2 days). It’s a transparent, crime-diminishing feature that makes it as easy as possible for festival-goers to trust a payment system.

Liny Kruger from LK Mediabook ran the media and held a feast of a breakfast for us on Saturday morning, despite a bit of a drizzle. I kept hearing from people that Swellendam is always hot as hell, but this year the rain and clouds broke the usual 40-degree Celsius temperatures. There was always something to do, whether missioning between the stages or getting food or going to a bar or bumping into someone you know. And of course, all the excellent music!

It was a treat seeing bands that aren’t usually on the Gauteng circuit. BRYNN was a breath of fresh air, friendly and incredibly intense on stage. With Hezron Chetty on violin, it felt like the crowd might orgasm. Dave van Vuuren is also a band member in Southern Wild, and these two bands are both at the top of their game.

Fokofpolisiekar were luxurious to watch. Not only did they perform my favourite song Tiny Town (first time I’ve ever seen it live), they also audibly shifted a gear into AC, while showing people they’re the same on-stage rockers you remember from varsity. Cape Town crowds are different, and it was good seeing them in their natural habitat.

Other highlights included Retro Dizzy, a glorious hot mess of bodies and rock guitars, as well as the Sublime Tribute Project (so much fun and bouncing, don’t think I’ve ever smiled or sung as much at a festival). I missed The Shabs, but I hear they’re a hoot. Crimson House played on Thursday before I got there, and I missed my beloved Bongeziwe Mabandla on Sunday in order to rush back to Cape Town (so that I could climb The Mountain).

Leaving the festival was a piece of pie. Without an early lift back, I hitchhiked for the first time in my life. Gail, A carefree middle-age woman in a Mazda 2 piled full of lilos, gave me a lift all the way to my Airbnb in Rondebosch. I would never dream of hiking for a lift with a stranger, but the festival seemed so open and trusting that I was convinced the universe would serve up an interesting experience (it did – “It’s later than you think” is the casual wisdom tucked into Gail’s sun visor).

Next year I’ll go from the Thursday and be the last to leave on Sunday. It’s so pleasant and relaxed, you can call it a holiday, not just a festival. Cheers, and thank you, Up The Creek.

When I joked (badly) in January that this Chinese year of the Rooster is really just the Year of The Cock, I had no idea. There were so many great songs for the last part of the year, and not even from all the big bands or artists that you’d expect. In-between all the political, economic and climatic mayhem there was some sensible music being made.

Trends for the year include hearing amazing female vocals everywhere I listened and a return to “solos” in pop songs (guitar solos for sure, but other instruments too). Trumpety-trump proved to be a strong influence, adding a whole new chapter to the history protest songs. Everyone from Arcade Fire & Mavis Staples to Billy Bragg took a stab from across the pond, not to mention all the angry music (see Best Of Albums list). On the Side B playlist, the orange man gets a cameo on “House Cat,” and is summarily dismissed by a nonchalant Mark Kozelek (as a cat). But that’s just one of the 2.5 hours of my favourite tracks from July-December 2017. Let’s all hit shuffle and go on holiday.

The National really are at the top of their game, and this album seems so effortless and smooth, I’d like to inhale it. They struggle though, and the intensity with which they wrestle their creative beasts are so pleasing and intoxicating. There’s absolute harmony and discordancy at work here, as well as really intimate lyrics. The record features the band’s first real guitar solos (there are two and they’re glorious).

The most brilliant record released this year to be met with equal and opposite amounts of scepticism. It’s one of their best to date and is overshadowed by their previous work. I only discovered LCD Soundsystem late anyway, but to me, this record sounds like prime LCD Soundsystem: the same themes but darker and the same sharp wit but with more bite. I don’t know why everyone calls it a comeback album when it’s clear that James Murphy never left the room. 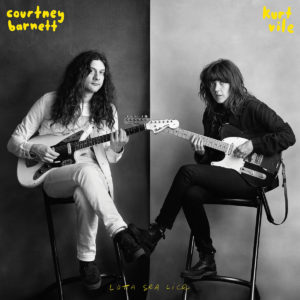 This record is my go-to album for 2017. It always matches the mood. With lots of happy, sad, rocking and laid back bits of quirky wisdom it makes sense that an honest, down to earth record would be the outcome from these slacker-rock indie darlings.

4. The War On Drugs – A Deeper Understanding

This album builds on the high standards set by Lost In A Dream, with the same wash of sound that transports you somewhere else. The mood is higher and the sound bolder, as if to resolve the two records in a celebration of victorious, dirty guitars.

An exciting and strange British freak-folk album from this dude who came out of nowhere. Dawson shows incredible bravery on this medieval Celtic off-key album. It’s dirty with beautiful melodies scattered haphazardly, and the record sticks and stays with you. The weirdest and most groundbreaking album that has chosen me for a while. 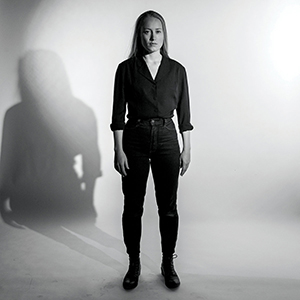 Oh, my kingdom for beautiful Canadian singer-songwriters! This record is classic Folk Gold in the vein of Joni Mitchell, but at the same time is Tamara Lindeman’s confident own voice. With mint production, engaging lyrics and a rolling musical urgency, this is definitely both a vinyl/headphone and crowd-pleaser record.

Finally, a band has risen to take the flame from Nick Cave & The Bad Seeds. Protomartyr are pissed-off and mysterious like a good Goth-inspired Post-Punk band should be. They have great rhythm and pace, with a surprising lulling quality for minor chords and dramatic badassery. Definitely music to watch Trump speeches or have existential crises to. 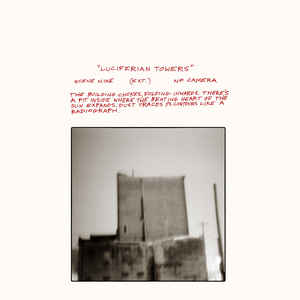 A very simplified GY!BE record that hits home and feels very true to now. The album fits in well with their body of work, although it’s by no means an extensive movement of beautiful music. Rather it presents a well-organized progression of rage as grandiose tracks bombard your ears for just under an hour. A cathartic listen. 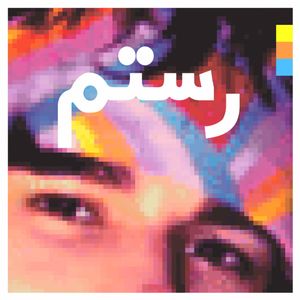 An eclectic debut from one half of vampire weekend. The album turns pop song structure around while echoing traditional pop melodies. An inspiring sweet, detailed album from Batmanglij that doesn’t really go anywhere, but that’s entirely ok.

A record that masterfully balances the traditional and new. South African Xhosa music has never sounded this modern or hypnotic, and this album turns sweet world music turned on its head.